On the FT’s Alphaville blog, Matthew Klein reviews Swiss monetary policy over the last years and its effect on the real economy. He concludes that

it seems the SNB’s relentless accumulation of foreign assets has been pointless — at best. More likely, the behaviour qualifies as predatory mercantilism at the expense of the rest of the world, especially Switzerland’s hard-hit neighbours. 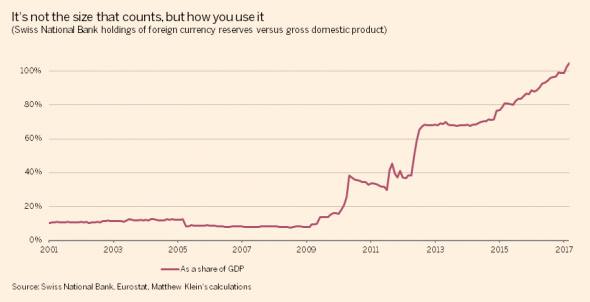 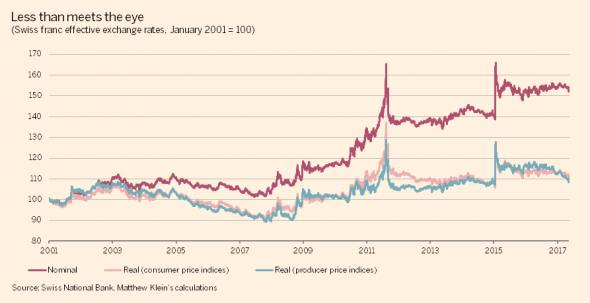 The Swiss National Bank has updated its exchange rate indices. In an SNB Economic Studies paper, Robert Müller describes how. The upshot is that the SNB considers the Swiss Franc slightly less overvalued than before. From the abstract:

The key aspects of the revision are: the application of the weighting method used by the IMF, which takes into account so-called third-market effects; continuous updating of the countries incorporated into the index; and calculation of a chained index. The methodological changes in the calculation of the new index have only a slight effect on the development of the nominal index. However, the difference between the nominal and real index (CPI-based) has increased with the new calculation. This is explained by the fact that countries with a greater weighting in the new index have higher average rates of inflation than those whose weighting has been reduced.

Adjusted for GDP, The Economist’s Big Mac Index suggests that the Swiss Franc is 9 percent over valued relative to the US Dollar while the Euro is 17 percent under valued.

The winners and losers of the current monetary environment are not that easy to identify. Investors holding long-term, non-indexed debt gain as unexpectedly low inflation shifts wealth from borrowers to lenders. Governments suffer from increased real debt burdens and reduced revenue due to effectively lower capital income tax rates. Policies that succeed in affecting the real exchange rate entail redistribution.

Was it wise for the Swiss National Bank (SNB) to abandon the exchange rate floor vis-a-vis the Euro (EUR) half a year ago (see the blog entry on the decision and on the critique by Willem Buiter)?

Here are some considerations to keep in mind.

Gilles Saint-Paul argued that the procedure does not make sense (blog post; European Parliament document). Because imbalances are hard to identify; and policy responses may be counter productive.

… if the speed of mean reversion is estimated, rather than calibrated, the model performs significantly worse than the random walk due to estimation error.

In an article about the recent exchange rate fluctuations, The Economist presents the following figure:

According to Big Mac Parity, the Swiss Franc has been overvalued relative to the US dollar by 40% to 100% for 25 years.

The Economist published its most recent Bic Mac index. The Swiss Franc is overvalued by 56% and the Euro undervalued by 11%.