In the FT, Ralph Atkins reports that Romeo Lacher, Chairman of SIX group, supports the idea of Switzerland introducing an ‘E-Franc.’

In an NBER working paper and a column on VoxEU, Michael Bordo and Andrew Levin make the case for central bank issued digital currency (CBDC).

Bordo and Levin favor an account-based CBDC system (managed or supervised by the central bank) rather than central bank issued tokens in the blockchain.

They emphasize the Friedman rule and the fact that interest paying CBDC affords the possibility to satisfy the rule:

These … goals – … a stable unit of account and an efficient medium of exchange – seemed to be irreconcilable due to the impracticalities of paying interest on paper currency, and hence Friedman advocated a steady deflation rather than price stability. But the achievement of both goals has now become feasible using a well-designed CBDC.

Interest paying CBDC would imply—payments to account holders. Bordo and Levin do not discuss the political economy implications. They are also silent about the transition from the current system with deposits to a new system with interest bearing CBDC in which demand for deposits would drastically fall.

Bordo and Levin favor abolishing cash to render monetary policy most powerful. Eliminating the option to withdraw cash would also eliminate the lower bound on nominal interest rates and would render unnecessary any “inflation buffer” of 2 percent or so. Monetary policy thus could move from positive inflation targets to a price level target.

Their paper contains a long list of useful references.

In a BIS Quarterly Review article, Morten Bech and Rodney Garratt offer a taxonomy of money, with special emphasis given to central bank issued digital and crypto currency. They stress four dimensions: 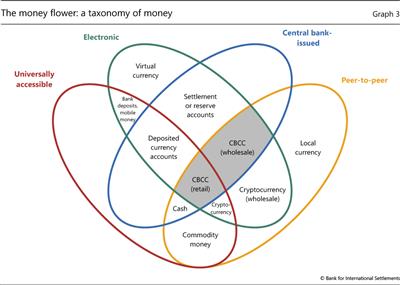 On Alphaville, Izabella Kaminska asks why a central bank would want to issue cryptocurrency rather than conventional digital currency.

… if anonymity is not the objective of issuing a centrally supervised cryptocurrency, what really is the point of using blockchain or crypto technology? Just issue a conventional digital currency and be done with it. If, on the other hand, anonymity is the objective of issuing a centrally supervised cryptocurrency, how can this be justified by a central bank in light of years of regulatory policy focused on making sure cashflows are more easily tracked and monitored … The idea it should be the central bank unwinding this trend is utterly bizarre.

… the only incentive central banks really have for introducing cryptocurrencies is in performing a giant monetary bait and switch. “Hey guys! We’re offering this amazing anonymous central bank currency which is as strong and stable as the dollar and yet just as anonymous as bitcoin!!! Come, all you illicit users of physical cash, come use our amazing new currency! We swear it’s absolutely anonymous and will never lead to prosecutions. Honest!!”

Her post relates to a recent BIS Quarterly Review article by Morten Bech and Rodney Garratt.

On bankunderground, Simon Scorer reminds us that a central bank issued digital currency (CBDC) need not operate on a distributed ledger platform. The two do not have much to do with each other.

Scorer suggests a series of technical requirements for a CBDC:

And he concludes that a distributed ledger does not meet all requirements.

It’s unlikely that all of the above attributes could be perfectly met with today’s technology; you may need to make compromises between features – e.g. the trade-off between resilience and privacy …

CBDC is far from just a simple question of technology; any central bank contemplating CBDC will need to answer a host of fundamental economic questions, as well as considering how feasible it is to achieve all the required features and what type of technology might enable this.

On his blog, Tony Yates raises the question whether the general public has a right to use central bank issued electronic money? Because of inclusion considerations? Or because providing cash and reserves is a central government function?